Jobseekers over £1,000 worse off in real-terms as rising inflation hits earnings

Real wages are starting to show symptoms of a post-Brexit slide, as inflation eats into wages and employers hold off on hiring more expensive staff, according to the latest UK Job Market Report from Adzuna.co.uk.

July saw advertised salaries drop to £32,688, down 2.4% from £33,505 in July 2015 – and marking the fourth consecutive month of decline. Alongside a widespread stagnation in salaries, there’s been a rise in the number of lower-paid and contract roles advertised as employers look to plug roles temporarily without committing to permanent hires. Brexit has also played a role, as sectors typically hiring higher-paid workers, like finance, delay taking on new staff and wait for political and economic decisions to become clearer. 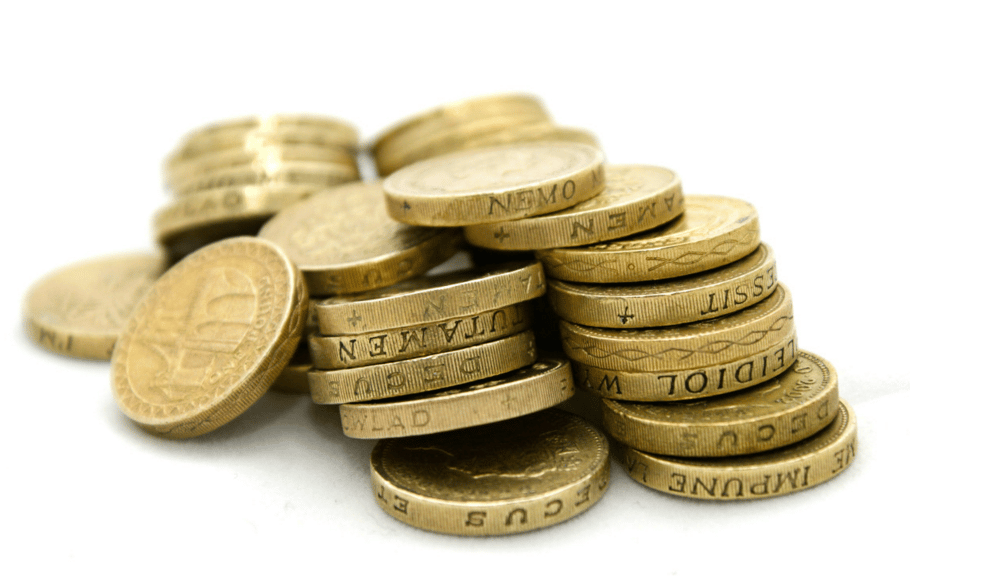 This has been coupled with rising inflation, recently climbing to 0.6%, leading to jobseekers being over £1,000 worse off in real-terms in July.

Meanwhile, advertised vacancies are rising as we approach late summer, reaching 1,154,993 positions in July 2016. By comparison, a year ago saw 1,128,112 advertised roles on offer – meaning positions have increased by 2.4%. This boost in vacancies has led to a further fall in job competition to 0.49 jobseeker per vacancy (down from 0.5 the previous month), with two jobseekers to each role.

Doug Monro, co-founder of Adzuna, comments: “Jobseekers might not be jumping for joy. After the shock of Brexit, a new PM and lower interest rates, rising inflation has now entered the ring. Not only are advertised salaries falling, but inflation is hitting workers hardest and where it really hurts – their wages. Lower-paid roles are becoming more common as finance and tech companies pull back on hiring. As we approach the last quarter of the year, the jobs market should see an injection of energy from seasonality and economic stimulus which could lead to a pickup in more senior and permanent hiring and positive salary news for job hunters.

“The resilience of the jobs market can’t be forgotten. Vacancies are rising and hiring overall seems to be back on track. The unemployment rate has fallen to levels not seen since 2005 and this is hugely encouraging. More people are in work – the next challenge is to get them earning the salary they deserve.”

Salary split emerges across the UK

Although all UK regions witnessed annual declines in average advertised salaries, half of UK cities saw salaries rise on a monthly basis. Winchester saw the largest monthly climb, with salaries rising 2.9% to £30,829. Brighton and Hove similarly saw advertised salaries in July rise to £30,366 – £352 higher than in June. Of those which saw a monthly drop, the Midlands bore the brunt of the falls.

Doug Monro, co-founder of Adzuna, comments: “There are two ways to look at this salary split across the UK.  Firstly, hidden in the annual trend is the beginning of a potential turnaround, with half of UK cities seeing monthly salary growth. However, the split also shows that not enough is being done to support certain cities which perhaps are more reliant on struggling sectors. Workers in the Midlands, the UK’s manufacturing core, have been feeling the strain for some time. The Midlands’ engine for growth still needs some revving.”

Key cities within the Midlands saw monthly dips in average advertised salaries in July, with Leicester seeing the largest fall to £28,556, down -0.6% from £28,737 the previous month.

The average advertised salary for graduates fell 4.3% to £23,609 in July, from £24,682 twelve months ago. This summer, many new grads may be struggling as fewer entry-level jobs enter the market. The number of advertised graduate vacancies stood at 12,838 in July, falling year-on-year from 15,659.

Doug Monro, co-founder of Adzuna, comments: “Normally this time of year is exciting for graduates. They’ve got a range of job choices, endless opportunities and tons of enthusiasm. This year seems slightly different despite there being more high-quality graduates than ever before. Companies are cautious about the future due to Brexit and so have less money to offer high starting salaries. It’s also hard to guess how many workers they will need. News that women in particular are being off put from applying for graduate jobs suggests more needs to be done to inspire career confidence during university. Recent grads shouldn’t be worrying just yet, plenty of roles are out there, but they must be prepared for a smaller starting career pay cheque and a tougher fight to get the best roles.”

The jobs market is also proving tough for students starting their university experience, as the number of part-time vacancies on offer in university towns fails to match demand.

Doug Monro, co-founder of Adzuna, comments: “Part-time jobs are a life saver for many students willing to give up their Saturday to earn some extra cash. More students will have to rely upon them as university fees rise and so this is bad news for students needing another source of income.

“You might expect students in big university cities like Manchester and Birmingham to have no problem securing some extra work but with just 1,133 part-time roles on offer in Manchester and 38,590 students at the University of Manchester this year it’s not quite that simple. Rising fees are heaping financial pressure on students and so part-time jobs will become an even bigger necessity to some.”

Belfast has overtaken Sunderland in July as the most difficult place in the UK to secure a job, with 4.05 jobseekers per each advertised vacancy. Pushed into second position, Sunderland now has 2.98 jobseekers per vacancy. 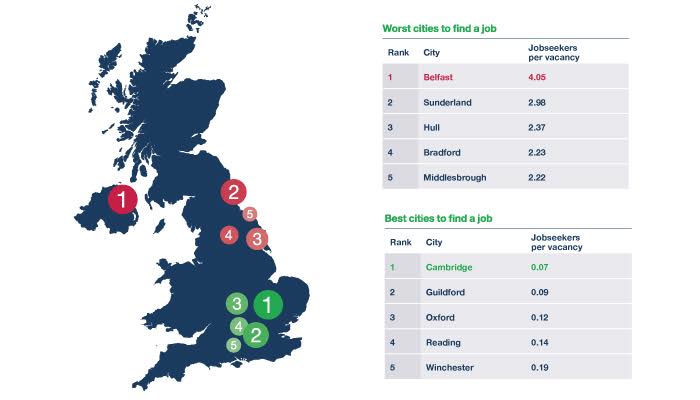