Jobseekers looking to move roles had fewer vacancies to choose from in August, as Brexit cautions and summer seasonality spurred a hiring lull, according to the latest UK Job Market Report from Adzuna.co.uk.

August saw 1,123,365 job vacancies being advertised, dropping 2.7% from 1,154,993 in July. The post-Brexit summer period of uncertainty, combined with a seasonal slowing in the market, lay behind this blip. However, hiring is 0.6% higher than six months ago and the jobs market is proving resilient in the face of political uncertainty.

Despite vacancies falling, the employment rate was 74.5% – its joint record highest level since comparable records started in 1971, according to the ONS. This has been partly propped up by the rise of the gig economy and growing self-employment as jobseekers look to alternative forms of employment amidst the growing entrepreneurial environment.

In a positive turn for jobseekers, advertised salaries rose for the first time in five months in August. The average salary stands at £32,784, up 0.3% from £32,688 in July. This marks the first salary rise since February 2016, and could signal the beginnings of a return to employers investing more to attract the best talent in the workforce.

The number of jobseekers per vacancy has remained at a consistent level of 0.49, as competition for jobs within the UK has seen no major fluctuations despite Brexit cautions.

Doug Monro, co-founder of Adzuna, comments: “Jobseekers looking to move into a new role are facing a slightly slimmer array of options. Hiring has certainly not ground to a halt as many predicted after Brexit, however, with more than a million openings on the market. This is a seasonal suspension, not a long-term lull. Working options provided by the gig economy are growing in popularity, while skilled workers in shortage areas like Tech and Engineering are hot property.

“It’s too early to sound a fanfare for the return of salary growth with wages still far below pre-recession levels, but jobseekers are seeing a modest salary boost. Inflation is expected to rise, so higher starting salaries will be critical to maintain real wages. The upcoming Autumn Statement is an opportunity for the new Chancellor to show his support for employers, boost confidence and herald a return to wage growth. He should encourage companies to invest in hiring and keep momentum building.”

Not all sectors have suffered a summer slowdown. The Consultancy sector has shown a strong performance with average advertised vacancies currently standing at 12,441, up 5% from 11,857 in July 2016, and up 10% from 2015. In addition, average Consultancy salaries have reached £47,760, up 8.9% year-on year, as employers are preparing to buffer themselves against the potential shortage of skilled workers following the EU referendum.

Doug Monro, co-founder of Adzuna, comments: “One sector benefitting from Brexit is the Consultancy industry. In an uncertain environment, companies are looking for highly skilled experts, without having to shoulder the burden of an expanding wage bill. Consultants are also helping them demystify the business consequences of the vote. Other industries like PR are also seeing salaries rise as employers prefer to commission projects to outside agencies, rather than hire permanent internal staff.”

Average advertised vacancies and salaries within the Consultancy sector

There is a stark difference in competition for jobs across the UK, with jobseekers in Northern Ireland facing a particularly raw deal. The region hosts the highest ratio of jobseekers to available vacancies at 8.39, as well as the lowest average salary at £28,134.

In comparison, the South East offers many lucrative opportunities for jobseekers – and the easiest experience finding work – with four jobs on offer for every jobseeker (a ratio of 0.25 jobseekers per vacancy) and the second highest average salary of £31,817, second only to London.

Competition for jobs across the UK

Doug Monro, co-founder of Adzuna, explains: “Stark differences exist in the hiring environment across the UK, meaning many savvy jobseekers are moving across the country in search of work. Southern England is leagues ahead of much of the UK in terms of offering more jobs and larger pay packets. And new opportunities keep opening up – Amazon have just announced plans to open up 1,500 new jobs in Tilbury, which will drive down competition in the East even further. But the magnetic pull of these regions actually damages those left behind. Regions like Northern Ireland are seeing their best talent draining away as companies fail to compete on pay. The job hunters left behind often don’t have the skills suited to fulfil the roles open, so upskilling jobseekers in these regions is necessary to meet demand.”

Half of UK cities saw salaries rise on a monthly basis. Winchester remains one of the highest monthly climbers with salaries rising around 3.5% to £31,898. Similarly, Chelmsford and Edinburgh have benefited from incremental salary increases of £265 and £356. In contrast, Belfast suffered the worst pitfall with average salaries dropping around 2.6%. The sharp decrease in average salary in Northern Ireland may have been triggered by the intense competition of 8.39 jobseekers per vacancy, highlighting an issue with supply and demand. 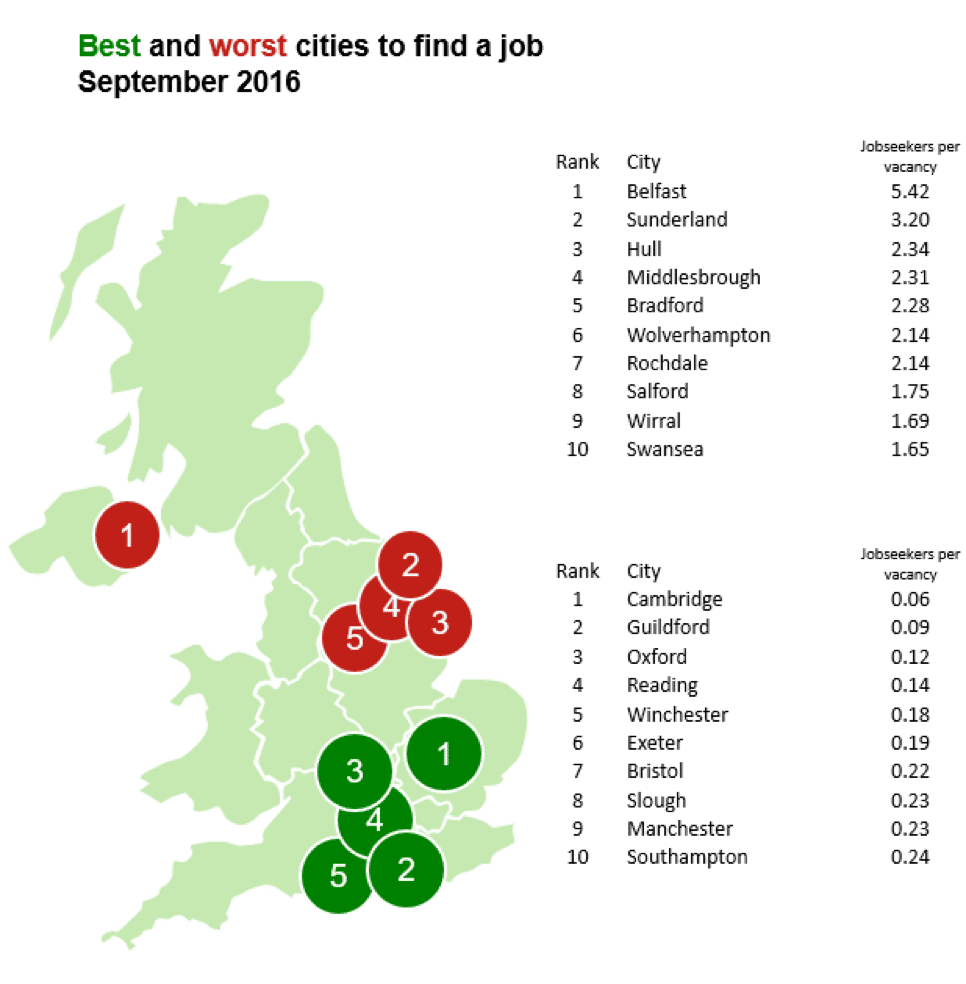