Founded on the back of a real passion for all things entrepreneurial, CrowdCube’s mission is to make it easier to raise money to start and grow a small business. Tasking themselves with taking the arduous process of tracking down investment for small business owners and making it sleek, easy to understand and generally less of a struggle, the team keep those values at the heart of everything they do – including their workplace. 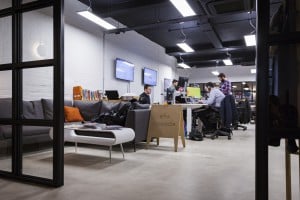 Like many of the businesses they support, CrowdCube are growing at a phenomenal rate and are proud to be market leaders. weighing in at three times bigger than their nearest competitor and having raised more money than the rest of the market combined. 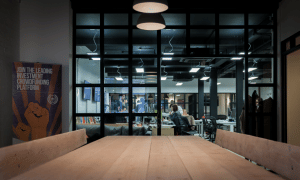 Not content with just being damn good at what they do (and they do take that very seriously indeed), they also set their sights on being a straight-up, awesome place to work.  And that starts with a top notch work environment: unlike your typical finance company, these guys chose the beauty of the  south west over the lure of shiny buildings in the City of London. With staff satisfaction in mind, they based their headquarters on the scenic hilly green campus of Exeter University, with immense views of the moors and the sea. Their team of 85 people, with 50 based in Exeter, is comprised of ex-members of eBay, Amazon, Goldman Sachs, Facebook and Google (to name but a few), which is further testament to the excellent employee experience they offer.

Their awards cabinet, after only a few years in operation, is already bursting at the seams, with accolades like the 205 Shares Awards, the MoneyWeek Awards and the Great british Entrepreneur awards, to name but a few, already gracing their shelves. 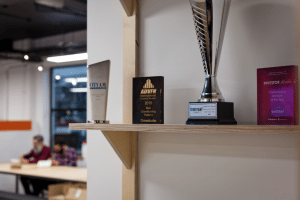 With company values including “Empower and trust people”, “Get stuff done, fast”,  and “You make a difference, celebrate it”, it’s clear their employees are pretty central to their awesome growth curve.

Perks like a private healthcare scheme and a company pension, and perhaps more importantly weekly beers (and fruit for balance!) show their passionate belief in the importance of celebrating not just corporate success, but each and every one of their people. 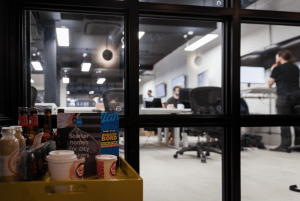 As well as all that, they pride themselves on their ability to laugh at ourselves; as was exemplified when they took part in, and won, the 2015 World Pancake Race championship. Flippin’ brilliant!

If you’d like to be part of one of Britain’s best workplaces, they currently are hiring for positions such as for tech superstars of all kinds. You can find their latest listings right here.