Want your office to feature in next year’s list? Get in touch!

Following the success of last year’s Coolest Office in Tech post we thought it a pretty nifty idea to produce a 2013 edition – plus it’s so much fun to research, we couldn’t resist.  This time we decided to compare the uber-cool creations and wonderful workspaces from our 6 international markets, pitting them against each other to see which country has the coolest office in the world. So, hold on to your stapler and be prepared to have your senses tantalised by our pick of the coolest offices in London, Brasil, Canada, South Africa, Australia and Germany.

Take a look at the 2016 list of Coolest Offices 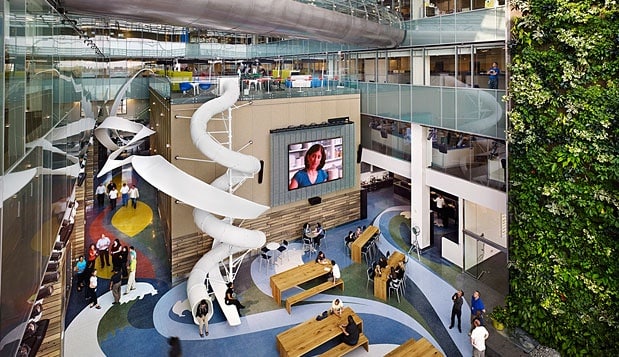 Welcome to the BBC’s new 21st century northern headquarters complete with everything from black “collaboration pods” to Security guards on Segway scooters and giant neon and metal “thought wheels”. We love how our ol’faithful BBC looks more like the set of Doctor Who than a typical corporate office.

Check out job vacancies at  BBC.

At over 500,000 square feet and housing over 1,000 members of staff, this is the biggest office on the list. Why wait for the elevator when you can take the slide? This building is all about having fun and bringing the entire work force of a company together in one place to create a boost in productivity, helping the company to continue to grow.

Where: Vancoover, Canada
Who: Hootsuite’s HQ
Why it’s cool:  Say no more – beer taps in the kitchen. Don’t miss Happy Hour at the taps, Fridays at 5pm.

HootSuite bought an old police station in Vancouver and gave it a pretty cool facelift. What’s not to like about these swanky new digs, complete with yoga studio, pup tent offices, and nap room. You name it, these offices have it, for friendly four-legged friends to ease the stress to free beer on Fridays, on tap in the kitchen. Where do I sign up?

Where: Rio de Janeiro, in Brasil
Who: Reserva’s HQ
Why it’s cool: Table football, musical instruments, a large kitchen counter and and even a wall covered in employees’ family pictures was thought to make them feel at home

This trendy Brazilian fashion group have recently moved into their new headquarters office in Rio de Janeiro. We love the attention to detail and the comfy corners to stimulate companionship.

We love the arty vibe of this Brazilian tech office. The meeting room is also a gallery, there is boat loads of cool handpicked furniture items and art pieces to create a brilliantly unique workplace. We especially love the green table-football room – bring on the World Cup 2014

Check out job vacancies at  Flag?

Leading media agency Mediacom have created this energised and creative workspace by using as much colour as possible.  This uber cool office space is also environmentally responsible and they’ve used branded graphics to unite the three floors.

Check out job vacancies at Mediacom.

This Australian media agency has definitely achieved the ‘wow’ factor in our opinion. We love the edgy elements such as a graffiti garage door and the attention to detail with the timber joiners and diagonally laid tiles in the kitchen.

Gotta love presentation and conference organising company, Missing Link’s  South African office – it’s completely off the wall. Their office is so bizarre – a place staff want to be and clients want to go. It contains a tree house, a shooting range (where clients complete to shoot presentation cliches), a tattoo studio called Missing Ink for staff and clients (free), a deli caravan, and a rock star stage.

Olgivy, one of the world’s biggest and best advertising agency, has offices in every corner of the globe. What sets this swanky South African workplace apart from other offices is the fact that if you walked inside, you’d be hard pressed to know that it is actually a place of work.

Check out job vacancies in Advertising?

This creative agency has definitely succeeded in creating and imaginative and stimulating office space. A design that inspires and entertains, topped by a panoramic view at the colourful life of locals, partygoers and tourists.

Check out job vacancies at a Creative Agency?

This ad agency is ultra-slick. Massive embedded tables built-in benches seem to glide across the floor as one fluid piece of furniture. Bench-backs of a cafe double as an interior wall of the main office, making the entire space feel unified.

11 entrepreneurs to inspire you this Black History Month