Richard Scudamore’s recent retirement from Executive Chairman of the Premier League didn’t exactly go unnoticed by football fans across the country.  Scudamore’s departure piqued such interested for one main reason: the insistence of the Premier League that each club donates £250,000 towards his £5 million ‘golden goodbye’. Perhaps what irritated fans most is the feeling that, whilst Scudamore has undoubtedly done wonders for the Premier League as a brand, under his tenure watching football has skyrocketed in price, fixtures are movable feasts aimed towards maximising TV revenue at the expense of local fans, and, more generally, the Premier League’s ethos feels to have shifted entirely to a mantra of: profit first, football second.

To find out which clubs are guilty of abandoning their local fans by charging too much for tickets, we’ve used our exclusive job vacancy data to find out how the average advertised salary around the clubs compares to the price of the cheapest adult season ticket. By comparing the two we’ve come up with the amount of each average monthly paycheck you would have to pay if you live near the club and bought a season ticket.

The result at the top of the table was particularly surprising. Not used to sitting anywhere apart from the top of a table, Pep Guardiola’s Manchester City are not only most exciting team to watch play but also have the best relative affordability with it costing only 11.04% of the average advertised monthly salary to purchase their cheapest season ticket. Huddersfield came close to being the cheapest but, due to Huddersfield having a £4000 lower average advertised salary than Manchester, they were just edged out by the champions.

The most expensive season tickets in both absolute and relative terms were all to be found in London with Chelsea, Tottenham and Arsenal rounding off the top 3.  As has been the trend over the past few years, Tottenham just about outdid Arsenal with 36.84% of the average monthly salary and Arsenal propped up the table with 39.6%.

Adzuna searches thousands of websites bringing into one place almost every job vacancy in the UK. From this we were able to gather accurate estimations of local salaries. We then compared these average advertised salaries to the cheapest adult season ticket available at each club and worked out what percentage of the average advertised monthly salary a fan living near their club would have to pay to purchase this season ticket. 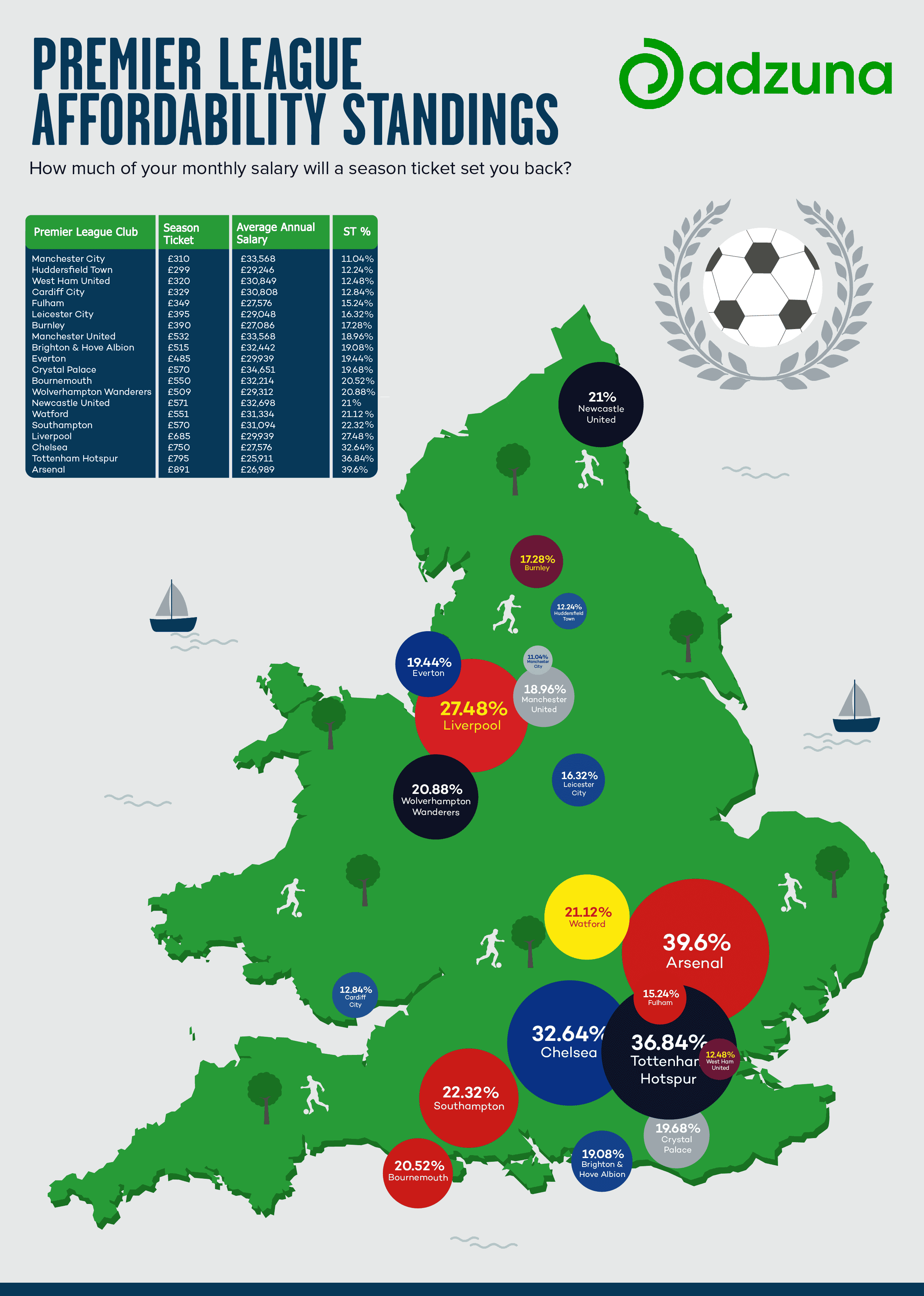 Adzuna.co.uk is a search engine for job ads used by over 10 million visitors per month that aims to list every job, everywhere. We search thousands of websites so our users don’t have to, bringing together millions of ads in one place. By providing smarter search options and powerful data about the job market, we give jobseekers the information they need to take control of their careers. Adzuna’s data also powers the Number 10 Dashboard, used by the Prime Minister and senior officials to keep track of economic growth on a daily basis.

Adzuna.co.uk was founded in 2011 by Andrew Hunter and Doug Monro, formerly of eBay, Gumtree, Qype and Zoopla and is backed by leading Venture Capital firms Passion Capital, The Accelerator Group and Index Ventures. Adzuna’s mission is to be the best place to start looking for a job. We love using the awesome power of technology to help match people to better, more fulfilling jobs and keep Britain working.