Employers have a legal and ethical responsibility to ensure their workplaces are free from implicit and explicit discrimination. A diverse workforce contributes to positive company culture and even improved profits, but many industries still struggle to balance the scales when it comes to both pay and recruitment.

In April 2018 the Office for National Statistics released their data on the gender pay gap. The results confirmed that previous patterns continue: 78% of companies pay men more than women and the pay gap sits at 18.1% for all workers.

The Fawcett Society further emphasised the level of gender bias in our workforce with their announcement that, despite the commencement of the Equality Pay Act almost 45 years ago, Equal Pay Day fell on the 10th November 2018. That means in early November, women effectively stopped being paid compared to their male counterparts. 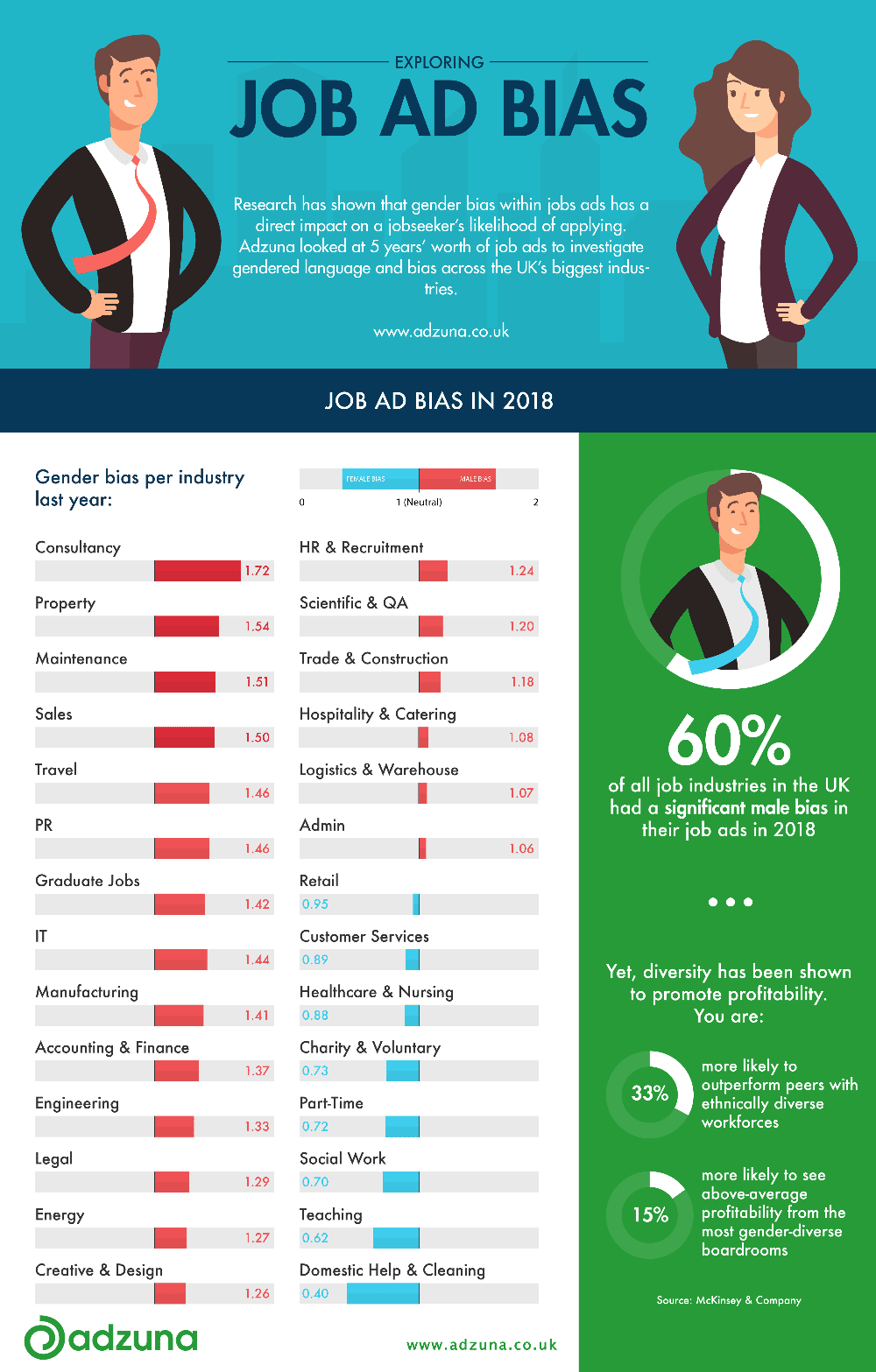 The results of a recent study by Gaucher, Friesen, and Kay have shown that male-dominated industries used much more male-biased language within their job ads. When experimental job adverts were altered to include more male-biased than female-biased language, women were less likely to apply to those roles. We used the list of masculine and feminine-coded words from this study, categorised by societal gender associations, and charted the use of each word, in each industry, over the last 5 years.

We found that 60% of all industries in the UK exhibited significant male bias and, on average, UK job ads used 17% more masculine-associated language than feminine language. This implicit bias can work to discourage female applicants and has a direct impact upon the pay gap as it influences people’s likelihood to apply for higher-paying jobs. We can see this if you compare the most male and female-biased industries in terms of the wording of job ads in Consulting and Domestic Help and Cleaning, respectively. According to Adzuna salary data, as of Jan 2019, the average salary for a consultant is £12,000 higher than that of the average cleaner. While this is just a single comparison, it provides a clear example of how societal pressure can push people towards lower paying roles that they feel are more ‘suited’ to their gender. This passive discouragement away from higher paying jobs is a direct contributor towards the gender pay-gap.

Despite continuing inequality in the workplace there have been significant positive changes in the wording of job ads over the past 4 years. While the language used is still far from gender-neutral, we have seen year-on-year improvements in the national average every year since 2015. This has resulted in a decline in male bias from the high of 1.30 male to female-weighted words in 2015 through to the current level of 1.17. This overall trend towards neutrality will hopefully lead to an erosion of societal gender/industry association bias in the future. But given the varied nature of the job market and the diversity of stereotypes for individual industries, it is important that individual industries tackle gender bias in their wording, rather than just looking at the UK market as a whole. 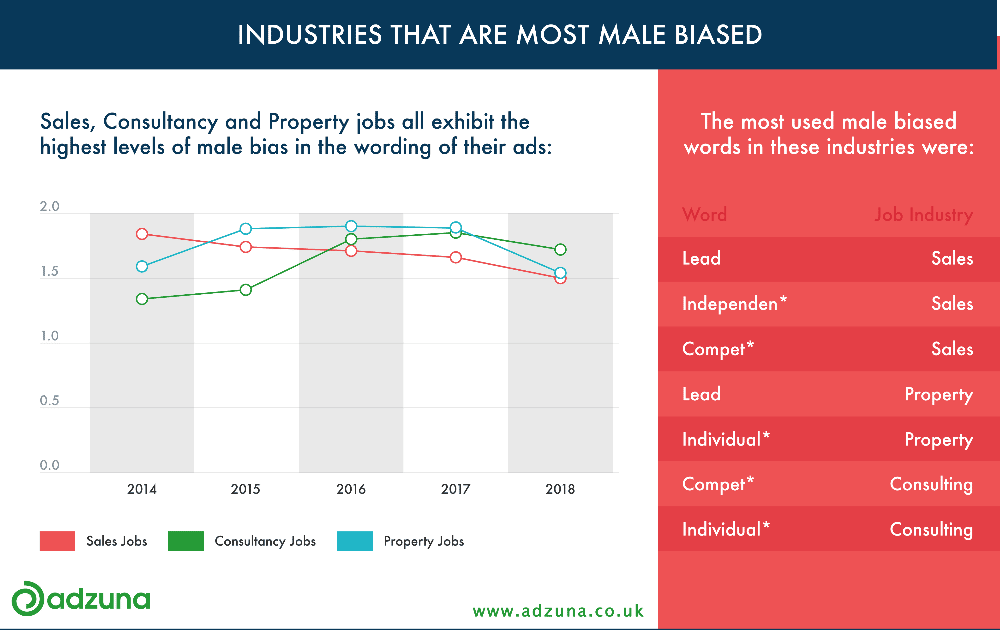 As the above graph shows, there are still industries that are actively discouraging female applicants through the wording of their job ads. The biggest culprits are the Sales, Consultancy, and Property. All these industries currently have 50% or more male-biased words than female-biased words. While the Sales industry has seen a small move towards neutrality, falling from 1.84 to 1.50, both the Consultancy and the Property industries have failed to make any meaningful progress. In fact, not only does the Consultancy industry have the most discouraging ads for female applicants, it has actually become more male-biased since 2014 with a significant shift of weighting from 1.34 to 1.72 in that period.

The two other industries where jobs ads have become more targeted towards men since 2015 are the Maintenance and Travel industries. While the Travel industry has only seen a moderate shift since 2015, the last few years are particularly worrying with the industry moving from 1.31 to 1.46 in just 3 years. A similar story is present in the Maintenance industry that saw a rapid move towards neutrality between 2014 and 2016 but since then has seen its level of male-bias rise from 1.21 to 1.51. 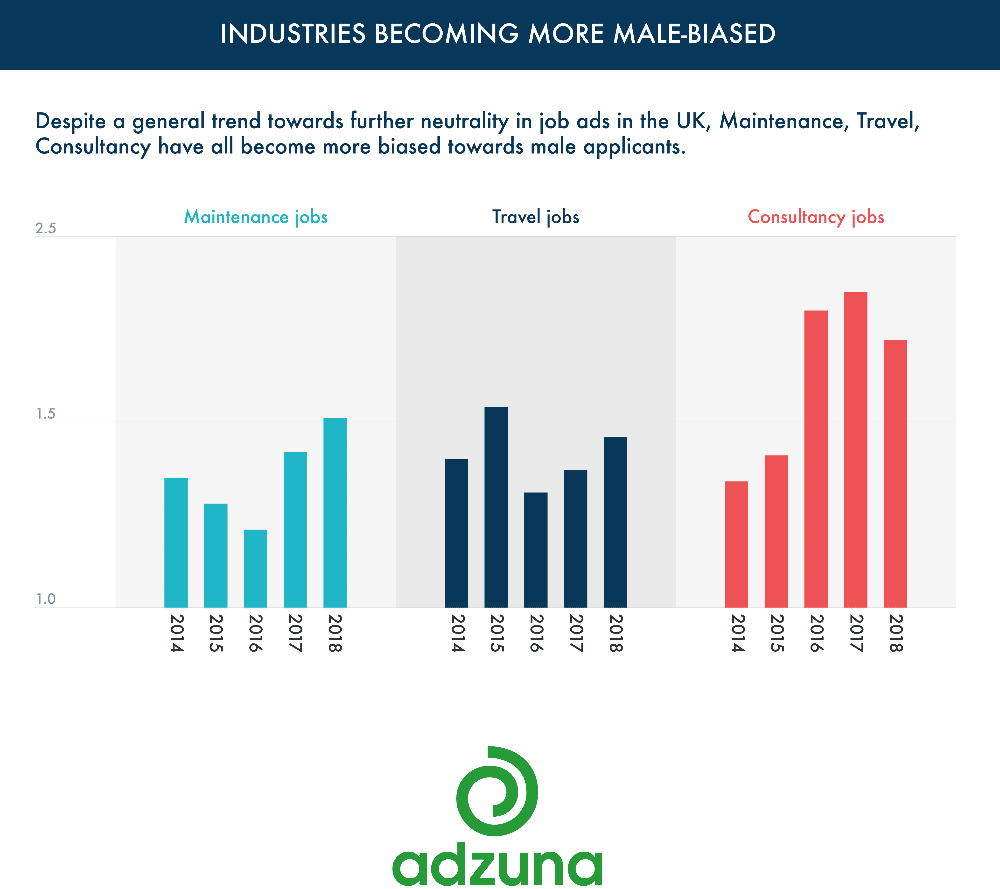 Over the past 5 years we have seen a generally positive trend towards gender-neutral job ads however we are still a long way from neutrality. The effects of which are present in society in general, as was shown by the ONS statistics from April. There are, however, industries that should be making a more active effort to combat gender-bias within their ads, most notably the Consultancy industry which is not only the most male-biased industry, but has also become significantly more so over the past 5 years.For those industries that need to make the active effort to move towards gender-neutrality this isn’t simply a social prerogative but also carries significant economic bonus. Diversity in the workplace has been shown to improve sales revenue and profits. Given the simplicity of the changes needed for gender-neutral wording and the vast social and economic benefits, alongside the moral imperative, it’s essential that industries do start paying attention to the way their job adverts are written. Words do matter.

To collate this data we put together a list of gender-biased words based upon the study by Danielle Gaucher, Justin P. Friesen and Aaron C Kay, Evidence That Gendered Wording in Job Advertisements Exists and Sustains Gender Inequality. These words were split into male-biased and female-biased words. We then took a one-month period from every year from 2014 to 2018 and scanned each job ad within this period for the gender-biased words. As such, we were able to compile a breakdown of the numbers of individual words in each industry in each year. From this data we then compared the numbers of male-biased to female-biased words in total, for each year, and for each industry.

Adzuna asks: How can organisations be LGBTQ+ inclusive?

Attracting diverse candidates: How not to write a job ad